WILL SMITH!! GROOMING OF JADEN SMITH IS COMPLETE!!

Valentine’s Day (The Price of Love) – A Lupercalia Special

Welcome to Hotel California – The Rise of Lucifer

EASTER: The Pagan Passover (Nimrod, The Queen of Heaven, Tammuz)

EASTER: The Pagan Passover (Nimrod, The Queen of Heaven, Tammuz)

Messenger of the Name

(Mirroring) The Cultural Melting-Pot of a Pagan Easter

Easter is one of Christianity’s highest and holiest days, the celebration of the resurrection of Jesus. But the origins of today’s very Christian holiday are firmly rooted in the ancient traditions of pagan religions from many parts of the world. With its blend of solemn religious symbolism and the fun of Easter eggs and bunny rabbits, Easter as we know it is a patchwork of beliefs and practices related to the themes of springtime, rebirth, and renewal. So, what does pagan mean and, more specifically, what involves a pagan Easter?

What Does “Pagan” Mean?

Pagan was originally a term used to describe people who practiced non-Christian religions. The term, which had a derogatory connotation, was assigned by early Christians. As Christianity was spreading in its early days in Europe, there were still many people who maintained their polytheistic beliefs. Those people were subject to the pejorative term, which served as a form of social pressure to convert to Christianity, and identified targets for discrimination. However, since the 21st century, certain people of non-Christian faiths, primarily those that adopted a form of spirituality, began to use the term to describe themselves. Paganism is now a religion of its own. But early pagans are credited with laying the foundation for the Easter as we know it today, and thus, some people consider it a pagan Easter.

Where Did the Name Easter Come From?

Easter most likely takes its name from the names of goddesses associated with spring, vernal equinox and renewal. Eostre was the Saxon mother goddess, the source of all things and the bringer of new life. Around the same time, Teutonic tribes worshiped the dawn goddess Ostara, who also represented fertility and rebirth. 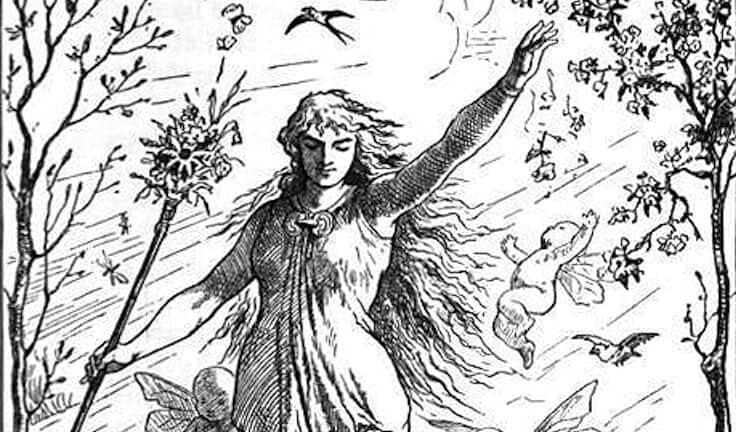 Other pagan cults and deities played a part in the formation of Easter, too. Around 200 BCE, the mystery cult of the goddess Cybele was popular in Rome and its surrounding areas. Cybele, another goddess of renewal and spring, had a lover named Attis, who was born of a virgin, and died and was reborn every spring.

The legend of Attis’ birth is also associated with other deities including Dionysius, Tammuz and Osiris – and, scholars believe, with the life and death of Jesus. As Christianity rose to prominence alongside those pagan beliefs, elements of the celebrations of Eostre, Ostara, Attis and other deities became inextricably intertwined with the Christian narrative of Jesus’ death and resurrection.

Why Easter Falls on Different Dates

Easter doesn’t fall on the same date every year. Thus, even this aspect of the holiday is connected with pagan celebrations of the cycles of nature. The vernal equinox marks the time when night and day are of equal length. It’s also a celebration by pagan cultures to welcome the arrival of the long days of spring and summer.

For Christians in Western traditions, Easter is celebrated on the first Sunday after the first full moon following the vernal equinox. This is a formula set in 325 CE by the Council of Nicaea, which established many points of doctrine for the early Christian church. Eastern Orthodox Christians celebrate Easter on a different timetable though – as much as three weeks later than “standard” Easter.

What Are the Pagan Easter Symbols?

Today’s Easter is a mix of symbols from Christianity and traditions far older. Alongside the overtly religious celebration of Jesus’ death and resurrection, people of all ages and beliefs enjoy colored eggs, egg hunts, candy rabbits, and chickens. Also, the Easter baskets filled with gifts, candies and springtime colors are an important part of today’s celebration.

All of these Easter favorites clearly echo pagan beliefs. Many of those beliefs were very much in tune with nature – animal births, seasons and cycles of the moon and sun.  The rabbit, symbol of fertility and agility, was sacred to Ostara. Eggs, chicks, green grass and sweets speak to the ancient celebration of new life and rebirth during warm spring days. Many ancient pagan cultures exchanged eggs as a celebration of the changing season into spring and blessing of fertility.

Although Easter has become known as a Christian holiday around the world, celebrating the sacred death and rebirth of Jesus, the true pagan Easter and its symbols is a clear testament to the historical melting pot of cultures and traditions that make Easter what is is today.

This site uses Akismet to reduce spam. Learn how your comment data is processed.

Help us beat Mainstream Media by becoming an active Member inside our Community!

%d bloggers like this:
We use cookies to ensure that we give you the best experience on our website. If you continue to use this site we will assume that you are happy with it.Accept